My wife is away on an overnight field trip which leaves me with the run of the house. Well, me and the dog. So with the cat away, the pressure for this mouse to find the right things to “play” is almost overwhelming. It’s not that I can’t usually indulge in my nerdisms, but when it’s just me, there’s this added pressure that I must. Every minute must be accounted for to gain the maximum amount of fun. That I need to really drill down and get as much as I can out of the experience. There were plenty of things I could have done, but last night boiled down to simply two. Hearthstone and Jurassic Park.

I’m a pretty big fan of Hearthstone. It’s on the simpler side mechanics-wise as far as collectible card games go, but there’s just something about it. It’s got claws in me. Big, razor sharp ones with barbs that won’t come out without gutting me. Maybe it’s because it scratches BOTH my Magic the Gathering and World of Warcraft itches simultaneous. Maybe it’s just a fun card game. Who knows?

Anyway, I had knocked out the last of my dailies that morning and needed something to that evening. You know, getting back to the whole indulging myself thing here. So I did a couple of arena runs. Let me make something clear here before we begin. I love the arena and I also hate it. I am not good at arena play.  For those of you who don’t play Hearthstone, it’s essentially a draft so it doesn’t matter how many cards you’ve collected. The game provides them for you. The drafting part is fun. I always feel like I make good choices, but then implementing this ramshackle deck usually shows me how wrong I am. The most wins I’d ever had in the arena was 4. To put this in perspective, you can get a total of 12 before the game lavishes you in riches for “winning” the arena and kicks you out.

In the spirit of indulgence, I bought in and went for a run. I had high hopes in the beginning. Grabbed rogue which is my class of choice and thought I made a pretty solid deck. Boy was I wrong. Finished the run with only 2 wins and 3 losses.

Dismayed, but not defeated I went back in. Grabbed hunter this time and built what I think is a pretty ridiculous deck. So much so, that I shattered my old win total of 4 and by 6-0 I was undefeated. 7 wins is the magic number in that this is when the game rewards you with more gold than it cost to buy in originally and you actually come out ahead. If I could win just one more time, they’d make a movie about my experience.

The next three games was a crushing series of defeats. After that first loss, something broke inside of me and all of a sudden my sub conscious realized that it could lose. That’s all did from then on. I swear, though, that my deck played a completely different way in the loser’s bracket than it did with the winners. For 6 games it was nothing but traps and kick ass durability-regenerating bow then I entered a complete drought of traps. A Desert if you will.

Still, it made for an eventful evening. Next up was Jurassic Park to take me right into bedtime.

Let me drive home a second point here. I really like Hearthstone, but I freaking LOVE Jurassic Park. It is one of my all time favorite movies – holding the number 2 slot on the list just in case you were wondering – but more than that, it completely holds up. That film came out in 1993 and totally nailed it. I honestly compare any move that has come out since to see if it has the same level of Jurassic Park quality. The CGI is a little dated, but it still looks great thanks to the animatronics and actual costumed stunt guys. The shortcomings of one style is more than made up with the strengths of another kind of special effect. They figured this shit out in 1993. What’s Transformers’ excuse? 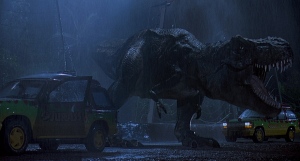 Seriously, how great is that scene? The T-Rex … the rain … it’s freaking amazing! So what if the goat’s leg is weird or that I don’t understand the geography of the Rex’s paddock … I don’t care. That roar is one of the coolest things I have ever heard. Followed by a close second … “Ian! Freeze!”

I know I’m looking at things with some rose colored glasses too. I love the book, I love these characters, I love the plot, hell, I love everything I’m looking at when I watch that movie. There’s something magical in that film, that awe of nature, that was so perfectly captured. I even love the soundtrack. It gets me every time. That song. You know the one I’m talking about. I tear up every freaking time I hear that song. 20 Years later and I’m still getting chills.

Add a little scotch to savor with one of the best movies ever made on top of a personal best in Hearthstone and I gotta say that it was a pretty epic night. Eventful? Maybe not. But my inner nerd is quite indulged and happily satisfied.

Makes me wonder what I’ll be getting up to tonight?