I had a pretty productive weekend. My wife and I ran a bunch of errands all day Saturday and then tackled the nursery. After cleaning it out and repainting what feels like forever ago, we’d only really turned the guest room into the baby junk room. But after Sunday, it’s 100% full on nursery time. I mean a baby could conceivably live there!

It went from this: 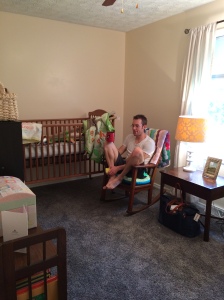 It only took all afternoon but it’s finished. It’s now a place where we can’t stop ourselves from peeking in the doorway as we walk by. Sunday evening, we spent an hour and a half just hanging out in there and soaking it all in. The dog joined us too which was probably good for her. She’s totally going to have first baby syndrome. I’ve tried explaining to her that just because we’re have two more babies doesn’t mean that I love her any less. In response, she usually rolls over and lifts her leg for a belly rub. I’m not sure she gets it.

There are still a few more things that need to go in there, but it’s basically done for the most part. Cross that item off the list and move down to the next hundred or more so to go.

We’re taking an all day baby class on Saturday at the hospital to brief us on what to expect during the birthing process. We could have gone for the three hours a week for three weeks version, but we didn’t have the time. Instead, it now feels like we’re cramming to have a baby. Hey, worked for all my tests, right?

As you can imagine, we’ve been thinking a lot about the future. How to be good people, how to be good parents, how to raise good kids, that kind of thing. Something always on the forefront of our minds is nutrition. I think it’s safe to say that my wife and I foodies. Well, maybe foodie-adjacent. We both love to cook and get really excited at a good farmer’s market, but if you come at me with crickets sauteed in peanut sauce on a brioche bun, my first impulse won’t be to immediately put it in my mouth. But I’d definitely think about it.

Anyway, we’re usually trying to eat better. Ever since we were serious about getting pregnant, we’ve switched to a lot of organic products. That’s not always affordable, so we do our best. But basically if we can get away with organic, we’re gonna do it. I bring all of this up, because we were already sort of against processed food but after watching Fed Up over the weekend, I’m convinced that processed food is the fucking devil. It lures you in with whispered words dripping with sugar (yes that’s a pun), but they’re all LIES!

If you haven’t seen the movie, I urge you to do so. I’ve never thought of myself as an activist, but this shit is seriously messed up. The stuff we put in our bodies in the name of food is absolutely atrocious. What’s worse though, and what makes me the sickest isn’t what the government is or is not doing, but just how powerful the almighty dollar really is. Time and again, the documentary shows when someone tried to step up and do the right thing, but ultimately the companies making us fatter and sicker are the ones who control the purse strings and strong arm these people into submission. It’s kind of horrible.

The film clearly has an agenda but I think it does a good job explaining its view point rather than just demonizing the food industry as a whole. It certainly doesn’t paint them in a favorable light, but there is actual fact, reason and scientific evidence backing up many of the filmmaker’s claims.

So now my wife and I talk about how we can make sure our kids are eating properly and how to show them vegetables are their friends. I mean if more people are going to die from food-related illnesses than from malnutrition for the first time in human history I’m pretty sure something isn’t running the way it’s supposed to. Food is what keeps us going. It shouldn’t be killing us.

That said, the writer in me is already filing this away for a killer story down the road. That wasn’t meant to be a pun, but what the hell, I’m gonna roll with it.