My brother got the flash fiction group back together. I don’t know how long it’ll last, but I thought you might be interested what I come up with. Every time I crank out a piece, I’ll make sure to post it. Enjoy! 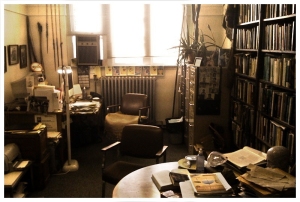 Dr. Sam Marsters rubbed his thumb over the tiny statue. The stone was smooth to the touch having been handled for hundreds, maybe even thousands, of years. The little figurine had been gradually ground down over countless gentle touches. With just the faintest traces of a willowy beard and an overly elongated head, it barely looked human anymore. “This is the second one this week,” Sam said.

“Now that we know what we’re looking for, they’re popping up all over the place.” Caleb checked the inventory list. “Kosovo, Papua New Guinea, Marseille, hell, even Baltimore. Climate … religion … doesn’t matter. Ever since the university started offering rewards for acquisitions, it’s been like a fire sale.”

“Thank God for benefactors, I guess.”

The office was cramped. Documents and catalogs were everywhere. Sam, leaned back, his leather chair squeaking while Caleb moved a stack of reports off the only other chair and took a seat opposite the desk. The cord of the ceiling fan clinked with the rotation.

Caleb shrugged. “Plenty of fake ones too. Who would’ve thought there’d be so many out there?”

“I think that’s the point.” Sam put the figurine down and massaged his eyes. Christ, he was tired. Bone tired. The weariness that settles into your marrow making you heavier than cement-tired. “I’m still having the dreams.”

“I’m sure most of the planet is by now.” Sam gestured toward the impressive inventory list. “Always the same thing too. Darkness. Pressure. Something’s coming. Something big.”

“They haven’t ruled out some kind of psychological warfare,” Caleb said.

Sam scowled. “This isn’t the War.” He snorted. “Please. You and I both know it’s more than that.”

Caleb was one of the calmer grad students, but even he was getting frayed around the edges. “Well then what?”

Sam crossed his arms. “There’s an intelligence, can’t you feel it? In the design, sure, but in the application too. Every time I see that black place, I can’t help but feel like something’s staring at me from the other side. This lurking presence just looking at me like it’s waiting to come through. Every time I think I’m getting close, like I’m about to see what’s in there, the dream shifts to the figurine-thing.”

“The Prophet figures. But that would mean whatever this thing is, it’s been trying to get our attention for a long time.” He looked to the bearded figurine sitting on the desk. “Some of those carvings are ancient.” The ceiling fan did little to relieve the heat or the humidity, but still Caleb shuddered. “So the dreams … they’re its way of announcing the arrival? You realize what you’re saying, right?”

“That an extraterrestrial intelligence has invaded our dreams and is sending us a ‘save the date’? Yeah, I know how that sounds.”

There was a knock at the door. “Dr. Marsters?” Lydia poked her head inside. He waved her in. “Another package for you, sir.” She handed him an already open box. The ripped tape and loose packing material looked like the entrails of a carcass.

“Cairo,” Sam said, checking the return address. Caleb made a note on the inventory list.

His fingers probed the contents searching for the familiar form of another Prophet figurine, but they brushed against something flat. He pulled the object out, spilling shredded paper pieces everywhere. It was a piece of wall tile.

“They sent it up from downstairs,” Lydia said. “Thought you’d know what to do with it.” Her hands clasped in front of her, she waited for dismissal.

Sam didn’t have the foggiest. The tile was old, that much was easy to tell. Probably like the figurine on his desk it could be anywhere from hundreds to thousands of years old. Hard to know without proper dating methods. It was painted, not carved. The style looked about right for what he knew was ancient Egyptian and …

The realization hit him like a kick to the gut. More sweat beaded on his brow. “Is this real?”

“That’s what they say.” Lydia shifted uncomfortably and checked a memo pad. “Let’s see … ah, here. Clay and paint composition put it somewhere around 2000 BC.”

“That’s all, Lydia.” Sam’s words sounded raspy even to his own ears. “Thank you.”

He waited until she’d closed the door behind her again and he was sure she’d be back at her desk before he flipped the tile over to show Caleb. There were many hieroglyphic markings he didn’t know, but the center image was obviously clear. Human shapes were kneeling, praying maybe, to something massive and humanoid with an overly elongated head. But instead of the beard, the figure’s mouth was a mass of writhing tentacles.

Sam’s hands tingled. He’d drop the tile if he wasn’t careful. “I don’t think it’s a ‘save the date’,” he said. “It’s not announcing its arrival, its announcing the return.”